Robin and I attended a fantastic German Christmas Party on December 11. Here are some photos and discussion of the dinner. Thank-You Sigi for opening your home to us and Thank-You to all the wonderful cooks! Enjoy!

Here is the table beautifully set. And below, is the food! Das Essen waschen lecker und köstlich! (Thank-You Google translator) In other words, and as Rachael would say, “YUM-O!” 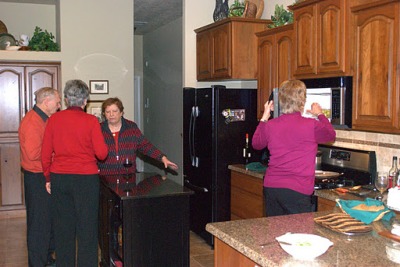 The kitchen was busy. 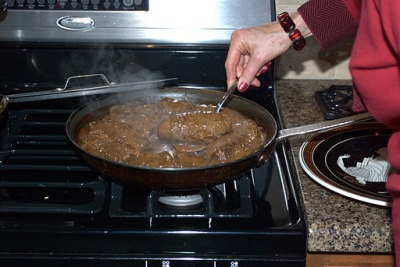 Rouladen in the pan. 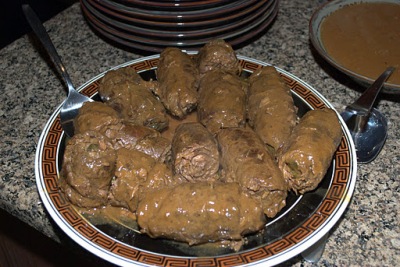 Can’t have a meal without Bread.

Now I know someone is going to ask, “What is Rouladen?” Here is at least one definition from Wikipedia.

Rouladen (or Rinderroulade, singular: roulade) are a German meat roulade usually consisting of bacon, onions, mustard and pickles wrapped in thinly sliced beef which is then cooked. In some countries, the roulade is also known as “beef olive”.

Beef or veal is used as meat though some food scholars tend to believe that the original version was probably venison or pork, and pork is still popular in some areas. The beef rouladen as we know them today have become popular over the last century. The cut is usually Topside Beef or Silverside since this is the cheaper cut. The more expensive version would be the round steak, also known as rump steak. The meat is cut into large, thin slices.

The filling is a mixture of smoked and cooked pork belly (Danish bacon), chopped onions and chopped pickles (gherkins) which is at times varied by adding minced meat, sausage meat and pine nuts. The mixture varies from region to region. Rouladen are traditionally served for dinner. Red wine is often served with this dish.

How it is made
In preparation, in the simplest of terms, hot mustard is spread onto the thin slices of meat and the prepared filling mixture is added on top. The meat and filling is then rolled up to a traditional elongated shape similar to a cigar. A thread (traditional), toothpick (modern), or a specialized clamp (also modern) is used to hold the roll together. The rouladen are first seared in a roasting dish together with carrots, celery, onions and bacon until they are nicely browned and the vegetables are somewhat caramelized. Red wine or beer and chicken or vegetable stock is then added, then slowly braised until the meat is tender. The braising takes between one and two hours depending on the meat and preferences.

Traditionally the pan was covered and placed on a raised iron mount in front of an open fireplace for the braising period. The height of the iron mount and the distance from the fire determined the temperature of the braise.

Today you either put the dish into an oven with the lid on at 175 °C (350 °F) or leave the dish on the stove at low temperatures and gently simmer until the meat is tender.

The Rouladen are then removed and some more beer, red wine or vegetable stock is added to the liquid. When the liquid is added, it lifts the flavor from the bottom of the dish to make a sauce for the meat. This liquid is reduced and then thickened to a gravy. The rouladen are then returned to the gravy and gently reheated.

How it is eaten
Rouladen are usually served with either Spätzle, potato dumplings or boiled potatoes and red cabbage. Roasted winter vegetables are another common side dish. The gravy is an absolute requirement to round off the dish and is usually poured over the meat. The Spätzle are a good complement to the dish since they soak up the gravy well.

This dish was considered a dish for common people; however, it is nowadays enjoyed by many as a festive dish.