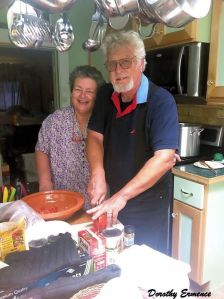 This was an awesome recipe from Ina Garten for Seafood Potpie. Although I did alter it slightly. I could not find lobster meat – my seafood shop, Reel Foods Fish Market here in Boise was out of it – I used three small lobster tails. (We are really lucky here in Boise to have such an outstanding seafood market that brings in some really fresh product.) I removed the lobster meat from the shell and then stewed down the lobster shells and shrimp shells to make my own seafood stock. It made a fine rich stock. I also used a small jar of clam juice with the stock. Add to this dinner a wonderful glass of 2012 Williamson Vineyards Blossom, 100% Sangiovese Rosè, and we had a great dinner. Try the recipe. Let us know how you liked it and/or if you altered it at any step. Enjoy these photos. Cheers!

This was really very good and we did like the housemade seafood stock.

Yes! Buddy wishes! (He licked the shell) An awesome dinner tonight and an easy recipe, but it takes a while to prepare. Coquilles St Jacques recipe. There is also a copy of this recipe in the recipe file above. It is simply a Date Night Dinner! Yup! It is that super. Serve it with a 2003 Marquis de Goulaine Muscadet Sevre and Maine (a cook in this castle invented Beurre Blanc – this is under dispute. But then, the French are always disputing something.) – oldest commercial wine produced by the same French family since the year 1000 – and then finish dinner with a glass of San Sebastian (FL) Port. Here are some photos. Enjoy! 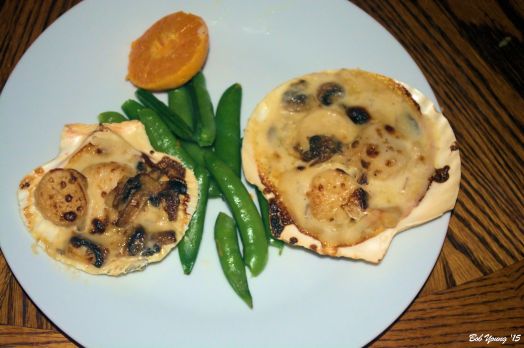 Who could ask for anything more?

At least I hope this post helps you to understand scallops a little better. The following information is from the Virginia Seafood Organization. Enjoy!

Sea Scallops
Market Forms – Fresh in gallons; frozen in 5 and 10 pound blocks; individually frozen in 1 and 5 pound boxes or bags. Scallops with roe, viewed as a delicacy in America and Europe, are available. A new product known as formed scallops is also available from some scallop processors.
Size – The sea scallop shell can grow as large as eight inches in diameter.The edible white muscle, or eye, can reach two inches in diameter. Scallops are designated according to count per pound: 10-20 per pound; 20-30 per pound; 30-40 per pound.
Taste/Texture – Scallops are tender with a sweet, nut-like flavor. The roe is pink with a firm texture when cooked.
Seasonality – Available year round.
Nutritional Value – 75 Calories (100 grams, 3.5 oz.)
16.8% Protein
.8% Fat
.20% Omega-3
Substitutability – The scallop can be used in some recipes to replace crabmeat or lobster. The roe is unique with its small pink, crescent shape and delicate flavor.
Folklore – While fish are often named after objects they resemble, in the case of the scallop it is the shellfish which has lent its name to other items. A scalloped hemline, for instance, resembles the fluting of the shell. Scalloped potatoes were named for their large shells once used as baking and serving containers for that dish. It is also the only bivalve to have a patron saint. The apostle St.James wore the shell as his personal emblem, which later became a badge for pilgrims who visited his shrine in the Middle Ages. Hence, Coquille Saint-Jacques.
Harvesting – Scallops are harvested by dredging in deep offshore waters. For maximum freshness, all processing is done at sea where they are cut, washed, bagged and stored on ice or frozen at sea.
Safety/Quality – Virginia’s waters and products are regulated by federal and state agencies including the FDA, the Virginia Department of Health, the Virginia Department of Agriculture and Consumer Services, the Virginia Department of Environmental Quality, and the Virginia Marine Resources Commission, insuring that only safe wholesome seafood reaches our customers.

Here is but one recipe for Coquilles St-Jacques from Saveur. The Coquilles St-Jacques are also known as Gratineed Scallops. Another recipe can be found for Coquilles St. Jacques at AllRecipes. And actually, it is this recipe from the Cooking Channel that brought all of this up. (Along with the fact that it is difficult, if not impossible, to find 10/1 scallops here in Boise.) We are going to try this tonight. It looks good! Seared Scallops and Prawns with Coconut Sauce and Tomato Mint Salsa. Have fun in the kitchen and Enjoy! We do.