A good party at The Buzz last night for the October Wine Dinner – Oktoberfest! A little bit of a change in the program. There were two beers offered that were pretty good, especially the Weihenstephaner, which was a light and refreshing lager. Very drinkable. From the Smit & Van Wyk blog, “The world’s longest continuously used trademark goes to the Benedictine Abbey Weilhenstephan in Germany, which has been using the mark Weilhenstephaner to identify its beer since 1040 AD When Britain enacted its trademark registration statute in 1876, beer was first and second in line, Bass’s Red Triangle became U.K. Reg. 1 for pale ale, and its Red Diamond for strong ale became U.K. Reg. 2.” A fun night. Hope to see you7 next month on November 11 and/or 12 for “Party Foods to Prepare Ahead” along with “Holiday and Gift Wines”. Then Beaujolais Nouveau Night on November 20. Cheers!! 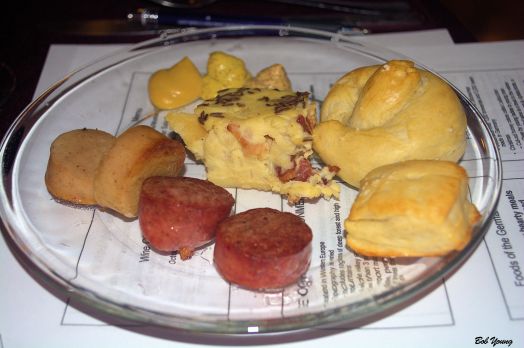 “Zwiebelkuchen, which literally means onion cake in the German language, is either a one-crust pie made of steamed onions, diced bacon, cream, and caraway seeds on a yeast dough or a leavened dough that is particularly popular in the German wine-growing regions mostly of Rhenish Hesse, the Palatinate, Franconia, Baden and Swabia (a similar pie called Flammkuchen is also eaten in Alsace), or a quiche variant in Switzerland, traditionally eaten in Basel during the Carnival and in Bern for the Zibelemärit.” [Wikipedia]

Pork and Apples
with
turnip and potato gratin and red cabbage
Rye Bread
2011 Il Canapone
14% alc an OK wine that went pretty good with the pork [16] $18.00 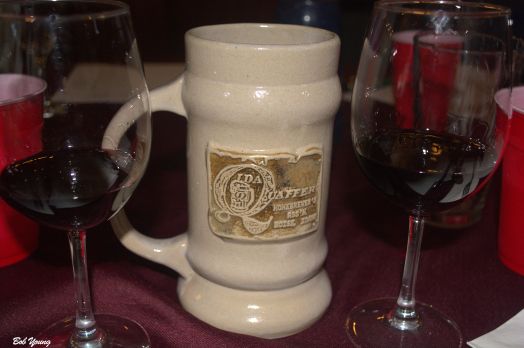 An interesting comment from Cristi about Oktoberfest mugs (steins) “Consumption about 5 million, 1-liter mugs [of beer] filled. Mugs are to be returned; Fine for stealing one is $60 US; security usually catches 150,000 each year, but the Hofbrau tent alone looses about 35,000 a year. ..6.3 million guests attended the 2014 Oktoberfest. 112 oxen, 48 calves and 6.4 million liters of beer were consumed. Tent security stopped 112,000 people from taking their mug home with them.” No, this is not one of “those” mugs!

For dinner last night, Brian made Robin, Marnie, Mac and I these scrumptious Pork Chops with Ginger Pear Sauce. Thank you Brian for this delightful meal – he can be awesome in the kitchen – and all of your help these past several weeks. And I know Robin appreciates your being here for her birthday. Here is his dinner. Enjoy! Here is The Recipe for these chops. 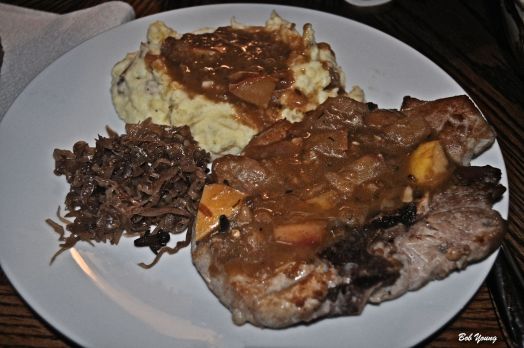