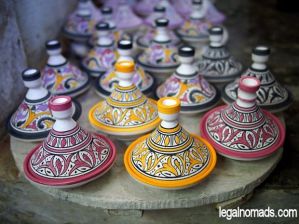 Robin and I like the cuisines of different cultures, as some of you may well know. The cooking traditions of Morocco or of the Mediterrean area, can produce some really wonderful dishes. But to do them, you probably would benefit by using the correct cooking utensil. In this case a tagine, as pictured here.

Tagine is named after the pot [an entree] is cooked in, a thick clay cone resting on a rounded base. While many tagines are ornamental – see the delicate ceramic ones [above], hand-painted carefully – the basic cooking version is unpainted and only occasionally glazed. Practical and durable (except if you drop it, of course), the dish is synonymous with Morocco for good reason: every roadside stall, tourist restaurant and cafe seems to have pots of the stuff simmering all day long. (legalnomads.com)

You can spend a lot of money on a tagine, or not. The ones pictured above, could be rather expensive. The one Robin and I have is an earthen color and can prepare a meal for 6. We bought it online and it was not expensive. A good source for information about Mediterrean cooking and tagines is Legal Nomads. Another good source on Facebook is the group Moroccan Cuisine. There are several articles, and tagine recipes, on this blog. One such article/recipe is Chicken Tagine and Mushrooms with Moroccan Green Olives. On this blog, search on the word tagine, and several articles will be found.
Basically, tagine cooking is defined as:

… By virtue of slow-cooking meat at low temperatures, effectively braising it until tender, a lower quality or tougher meat can be used. And the food cooks with minimum of additional liquid (water is added as it simmers), and no additional fat. The meat browns in the heated clay despite the slow simmer – the heat remains trapped inside the pot by the raised outer ridges on the base of the tagine. [legalnomads.com]

The method of cooking – via a tagine – is partially what makes this cooking style so unique. The other very important ingredient are the spices. Here are some that are used in tagine cooking, and in particular, foods from Morocco. Sweet paprika, good quantity of cumin, Moroccan saffron – if you can find it, turmeric, garlic, freshly chopped parsley, ground ginger, and salt and pepper. In the article, It’s Always Tagine O’Clock in Morocco, you will find more information on tagine cooking as well as recipes for Tagine of Beef, or Chicken or Mutton. Or, if you like shrimp or other shell fish, here is a good recipe for Tagine of Shrimp in Tomato Sauce.

Try this cuisine, you may find you like it. Think slow cooking and low heat. Sound familiar? And remember the tagine spices, and actually the ones I have listed are only a fraction of the spices use, but they are the basic ones. Enjoy!!