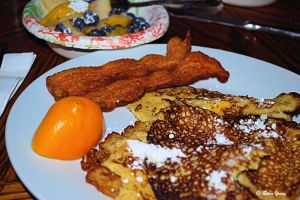 Shrove Tuesday (also known as Pancake Tuesday and Pancake Day) is the day preceding Ash Wednesday, the first day of Lent. Shrove Tuesday is determined by Easter; its date changes annually.
The expression “Shrove Tuesday” comes from the word shrive, meaning “confess.” Related popular practices are associated with celebrations before the fasting and religious obligations associated with the penitential season of Lent. The term Mardi gras is French for Fat Tuesday, referring to the practice of the last night of eating richer, fatty foods before the ritual fasting of the Lenten season, which begins on Ash Wednesday.
Contents
The word shrove is the past tense of the English verb shrive, which means to obtain absolution for one’s sins by way of Confession and doing penance. Thus Shrove Tuesday gets its name from the custom for Christians to be “shriven” before the start of Lent. Shrove Tuesday is the last day of “shrovetide”, somewhat analogous to the Carnival tradition that developed separately in countries of Latin Europe. The term “Shrove Tuesday” is no longer widely used in the United States or Canada outside of Liturgical Traditions, such as the Lutheran, Episcopal, and Roman Catholic Churches.

In the German tradition, Shrove Tuesday is known as Fauschnact Day.

Fasnacht, sometimes spelled Fastnacht or Faschnacht or Fosnot or Fosnaught is an English name for a fried doughnut served traditionally in the days of Carnival / Fastnacht or on (Shrove Tuesday), the day before Lent starts. Fasnachts were made as a way to empty the pantry of lard, sugar, fat, and butter, which were traditionally fasted from during Lent.
The Pennsylvania Dutch in the area surrounding Lancaster, Pennsylvania celebrate Fastnacht as well. Most chain supermarkets in eastern Pennsylvania offer fasnachts, although WalMart offers Pączki instead. The pączki is traditionally eaten in Poland on the Thursday prior to Fasnacht Day, although in Polish communities of the US, the tradition is more commonly celebrated on Fasnacht Day. Commonly pączki are round, rather than having straight sides, and they are filled with jelly, or sometimes creme filling.
In parts of Maryland, the treats are called Kinklings, and are only sold in bakeries on Shrove Tuesday. The German version is made from a yeast dough, deep fried, and coated or dusted in sugar or cinnamon sugar; they may be plain or filled with fruit jam. Pennsylvania Dutch fasnachts can often be potato doughnuts, and may be uncoated, powdered with table sugar, or dusted with confectioner’s sugar.
The term is synonymous with the Carnival season which is called Fasnacht in southern Germany, Switzerland, Alsace and Austria. Although usually written “Fastnacht”, there are many local spoken varieties: Fasnacht, Fassenacht, Fasnet etc.
The word Fastnacht originates from the German words Fast, an adverb meaning almost or nearly, and Nacht, meaning night, eve, indicating the eve of the traditional Lenten fasting period observed by many Christian denominations. It is the equivalent celebration to Mardi Gras or Carnevale.

I thought that you may want to know where these terms come from and their meanings. Enjoy! And just for fun, here is a link to a recipe for Fauschnacts. “Eat, drink and be merry. For tomorrow you may be dieting!” Well, at least that’s what Pop always said.