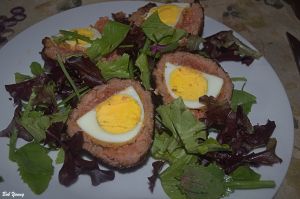 I have never tasted Scotch Eggs. Robin has, probably in another life or at Piper Pub here in Boise. They were “invented” in London in an upscale department store. Here is a link for more information on Scotch Eggs – What Are They?, posted earlier on this blog. (There is a recipe there also.) They are really not too difficult to make, but I think I should have had the heat a little lower, cooked them slower and a little longer. But they were good. Enjoy! 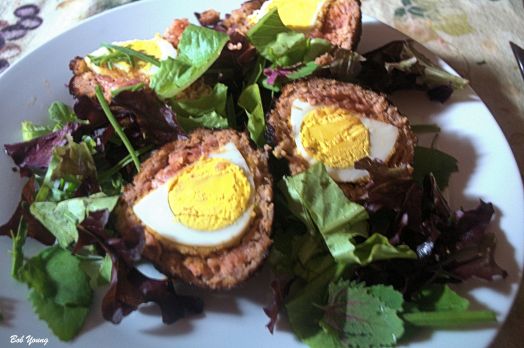 Scotch Eggs. This is how I presented them.

OK. So are they really from Scotland? Well, not exactly. They were “invented” in London in an upscale department store. Here is a short history from http://www.scotch-eggs.com. And now, I will probably try some of these and pretty soon. When I do, I will post the results here and if I run into any trouble along the way. I will post a recipe below that gives a pretty complete set of instructions. Enjoy!

The History of Scotch Eggs

In recent years the scotch egg has come back in to fashion, from being a fairly bland egg mayo filled affair from supermarkets to home made delicacies adorning pubs bars and menus. But where did it all start?

Legend has it the scotch egg was invented not by the Scots, but by Fortnum and Masons in London. Fortnums archives reveal that back in the 1730s they invented the scotch egg due to customer demand. Back then their customers would partake in long carriage journeys and needed portable snacks for sustenance.

The first reference of a scotch egg recipe appeared in Mrs Rundell’s cook book in 1809 entitled A New system of Domestic Cookery. You will however find better more conventional recipes in our recipe section!

The naming of the scotch egg came to fruition as “scotched” means processed, referring to wrapping a boiled egg in meat and then breadcrumbs. Scotch eggs can be made from hens eggs, quails eggs, duck eggs and at times goose eggs, though technically you could use most eggs, even ostrich!

With interchangeable eggs in the centre of scotch eggs comes experimentation in meat wrapping as well. Popular variations on classic sausage meat include black pudding, haggis, venison or less conventional alternatives like salmon!

As promised, here is a recipe for Scotch Eggs from Jamie Oliver. Enjoy!

Directions:
Place the eggs, still in their shells, in a pan of cold salted water. Place over a high heat and bring to the boil, then reduce the heat to simmer for exactly nine minutes.
Drain and cool the eggs under cold running water, then peel.

Divide the sausage meat mixture into four and flatten each out on a clean surface into ovals about 12.5cm/5in long and 7.5cm/3in at its widest point.

Place the seasoned flour onto a plate, then dredge each boiled egg in the flour. Place each onto a sausage meat oval, then wrap the sausage meat around each egg. Make sure the coating is smooth and completely covers each egg.

Dip each sausage meat-coated egg in the beaten egg, rolling to coat completely, then dip and roll into the breadcrumbs to completely cover.

Heat the oil in a deep heavy-bottomed pan, until a breadcrumb sizzles and turns brown when dropped into it. (CAUTION: hot oil can be dangerous. Do not leave unattended.)

Carefully place each scotch egg into the hot oil and deep-fry for 8-10 minutes, until golden and crisp and the sausage meat is completely cooked. Carefully remove from the oil with a slotted spoon and drain on kitchen paper.