Not long ago, we made a Mahogany Beef Stroganoff and it was surprisingly good. Even with some totally different ingredients. Hoisin Sauce for one. But there were two questions: (1) What makes it mahogany? and (2) Is it Russian or Italian or French? Well, the answer to the first question is sort of easy. The mahogany color comes from the addition of the Hoisin Sauce, a Chinese BBQ sauce. Question #2. The short answer is “Yes”. Wikipedia says,

The dish is named after one of the members of the influential Stroganov family. Elena Molokhovets’s classic Russian cookbook “A Gift to Young Housewives” gives the first known recipe for Govjadina po-strogonovski, s gorchitseju, “Beef à la Stroganov, with mustard” [typically French], in its 1871 edition. The recipe involves lightly floured beef cubes (not strips) sautéed, sauced with prepared mustard and broth, and finished with a small amount of sour cream: no onions, no mushrooms and no alcohol. A competition purported to have taken place in 1890 is sometimes mentioned in the dish’s history, but both the recipe and the name existed before then. Another recipe, this one from 1909, adds onions and tomato sauce, and serves it with crisp potato straws, which are considered the traditional side dish for beef Stroganoff in Russia. The version given in the 1938 “Larousse Gastronomique” includes beef strips, and onions, with either mustard or tomato paste optional. 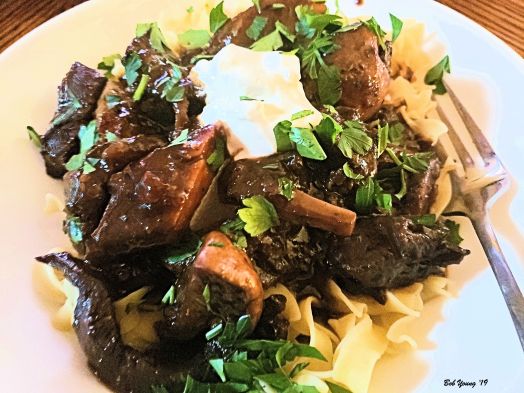 Sautéing of beef Stroganoff
After the fall of Tsarist Russia, the recipe was popularly served in the hotels and restaurants of China before the start of World War II. Russian and Chinese immigrants, as well as US servicemen stationed in pre-Communist China, brought several variants of the dish to the United States, which may account for its popularity during the 1950s. It came to Hong Kong in the late fifties, with Russian restaurants and hotels serving the dish with rice but not sour cream.

And from Cooksinfo, we learn,

There are at least two popular theories about how Beef Stroganoff originated.
One is that it was created in 1891 in St. Petersburg, Russia, by Charles Brière, a cook who worked for Count Pavel Alexandrovich Stroganov. Brière reputedly submitted the recipe in that year to “l’Art Culinaire” (presumably the magazine whose full name was “La Revue de l’Art Culinaire”.) This is the version proposed in the 2001 version of the English language “Larousse Gastronomique”. If this is so, it would seem to be just about Brière’s only claim to fame. His recipe called for shallots (now onions are used.)
The second is that it was created by an unknown cook for Count Grigory Stroganov (1770-1857), because the Count had lost his teeth and couldn’t chew meat. Beef Stroganoff, though, is probably just a more refined version of similar, pre-existing recipes…The last prominent scion of the dynasty, Count Pavel Stroganoff, was a celebrity in turn-of-the-century St. Petersburg, a dignitary at the court of Alexander III, a member of the Imperial Academy of Arts, and a gourmet. It is doubtful that Beef Stroganoff was his or his chef’s invention since the recipe was included in the 1871 edition of the Molokhovets cookbook…which predates his fame as a gourmet. Not a new recipe, by the way, but a refined version of an even older Russian recipe, it had probably been in the family for some years and became well known through Pavel Stroganoff’s love of entertaining.

There are also variations made with chicken or pork, which to me, looses the original likeness. I have made it with chicken, but always go back to beef. You be the judge. And just to note: we served this with a 2002 Ridge Vineyards Dynamite Hills Petite Syrah and I marinated the beef cubes in a little Hoisin Sauce, garlic powder and Worcestershire Sauce for several hours before browning it off. The marinating really made it rich. We also had it over medium wide egg noodles and topped the dish with sour cream and chopped parsley. Delicious!